Pipecandy is now part of

Save 30% on all our plans. Offer ends in

Can Shopify set its house in order?

Liked the report? Share it with your friends now! 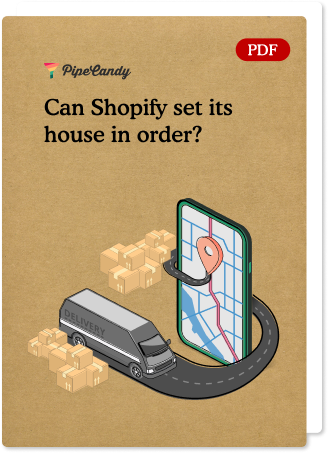 
Fulfillment (or Logistics) is one of the four critical pillars of eCommerce (Store, Payments and Marketing being the other three). Any eCommerce company's long-term success is only as strong as its eCommerce fulfillment operations. eCommerce fulfillment begins when a customer places an order online and ends when the product is delivered. It includes operations like storage, inventory management, order management, packing, shipping, post-order tracking and handling returns. This process requires significant investment that goes into a distributed order management system, warehouse management system and an elaborate packing process. Hence more merchants choose to outsource their fulfillment operations to a third-party logistics provider (3PL) than invest in operations of their own.

The merchant base of Shopify consists mostly of relatively smaller sellers generating less than USD 5M in annual Gross Merchandise Value (GMV). Just as Shopify enabled small-scale eCommerce merchants with easy-to-set-up store fronts, quick enablement of payments and an array of apps for marketing, it also provided an option for in-house fulfillment on its platform by way of Shopify Fulfillment Network (SFN).

SFN was announced in June 2019 and an investment of $1 billion was planned over five years to build the network. In Sep 2019, Shopify acquired the fulfillment-automation startup 6 River Systems for $450 million. In order to complement 6 River Systems' robotics, Shopify built a fulfillment-management software and has rolled it out in a few facilities.

SFN addresses the fulfillment needs of merchants who are challenged by customer demands of free and fast shipping and returns. For Shopify itself it is a way to accommodate and nurture the rapidly evolving direct-to-consumer brand economy that it largely supports.

This report examines how SFN works and whether it is able to provide the required cohesion to its merchant base in the wake of competition from Amazon. We examine what Shopify Fulfillment Network offers, what's in store for SFN, how shipping and delivery speeds offered by DTC merchants stack up and whether Shopify has a competitive advantage over Shopify in offering fulfillment services to non-Amazon sellers.

Summary of the report


What is Shopify Fulfillment Network? How does it work?


Shopify Fulfillment Network is a paid service that takes care of all the logistics of storing, picking, packing, processing and shipping a member merchant's product deliveries. Prior to SFN, Shopify was already offering Shopify Shipping through which merchants could get up to 88% off on shipping through USPS, UPS, and DHL. Under Shopify Shipping, the merchant handled the inventory and warehousing while the product was picked up by the shipper and sent to the customer. SFN enables the merchant to get their inventory closer to their customer through its multiple fulfillment centers across the US and Canada. Merchants merely send their inventory to one of the fulfillment centers where Machine Learning is used to determine the best geographical location to store the product. SFN then handles all the logistics within the fulfillment centers, including dealing with customer returns. This removed the burden of inventory management while ensuring shipping speeds mandated by customer expectations are met.

Why is Fulfillment important to Shopify?


In late 2021, Shopify began consolidating its network into larger facilities and operating more of them directly for better control of quality and cost. This was meant to help direct-to-consumer self-shippers to compete with big-box retailers, prioritizing two-day shipping at affordable prices and access to easy returns for U.S. shoppers. The pilot network covered 90% of the US population with two-day delivery coverage.

There are three reasons why SFN is important to Shopify:

What are the initiatives of Shopify on SFN?


In 2019 Shopify had planned to invest $1 billion over five years to build the network and acquired fulfillment-automation startup 6 River Systems. At that time, Shopify Shipping was already being used by 44% of eligible merchants but SFN had fulfilled less than one million orders.

Through 2021, SFN had spent only USD 117M on an asset-light plan to build SFN. While sign-ups to SFN grew, it was shadowed by the sign-ups to Shopify Shipping as consumers preferred it over SFN. The fulfillment program was initially open to merchants who were taking 10-1000 orders a day; Currently, it fulfills the orders of merchants with daily order volume ranging between three and 200.

In August 2021, Shopify opened a 563,000-square-foot self-operated leased warehouse in Atlanta. By January 2022, Shopify terminated the contracts with several warehouse and fulfillment partners. Shopify claims that it is consolidating its network into larger facilities and shifting to operate more of them directly for better control of quality and cost. It is supposed to help hyper-growth self-shippers among direct-to-consumer brands to compete with big-box retailers, prioritizing two-day shipping at affordable prices and enabling access to easy returns for US shoppers. Going forward, Shopify plans to operate similar warehouses as in Atlanta by itself and partnering when required.

Over the next three years through 2024, their planned investment (USD 1B) is expected to expand the merchant value proposition including increasing one-day delivery coverage in the US. The pilot program which commenced in January 2022 covers 90% of the US population with two-day delivery coverage.

In May 2022, immediately after Amazon's announcement of 'Buy With Prime', Shopify announced the acquisition of Deliverr, an end-to-end logistics provider. Deliverr has a nationwide fulfillment network with warehouses within 100 miles of half the population of the US. In late June, Shopify announced the inclusion of B2B businesses under its umbrella, expanding its Total Addressable Market. It should be noted that Deliverr specializes in B2B deliveries. 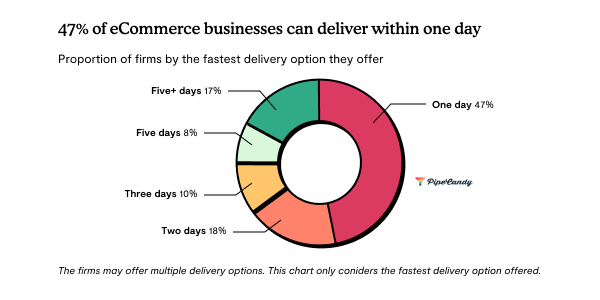 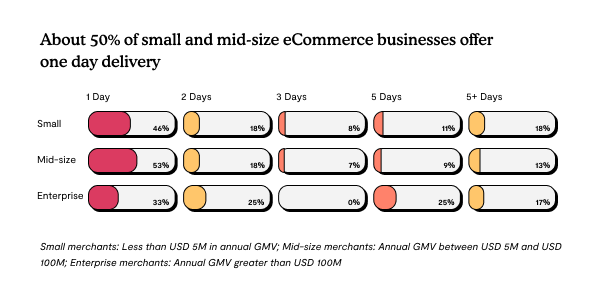 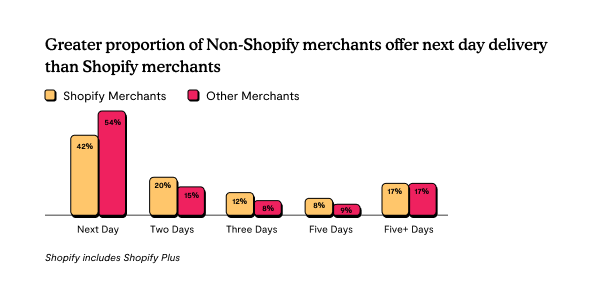 The proportion of merchants offering delivery in two days or less is lesser among Shopify merchants throughout all business sizes. The difference is the highest in the enterprise segment. 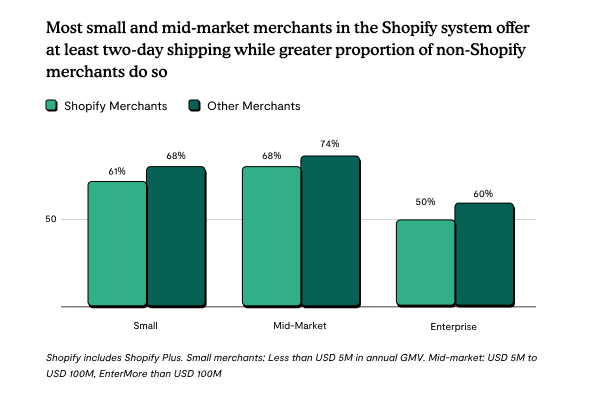 Shopify has a large base of small and mid-market businesses. While it will eventually be able to offer two-day delivery to 90% of the US consumers, it has to scale up on the expectations of next day delivery as Amazon FBA can effectively offer it quickly with larger and more widespread warehouses and higher economies of scale. Without planning for next-day delivery capability it would be difficult for Shopify to stop conversions to Amazon programs or wean them from their own outsourced logistics programs.


Amazon is a master of fulfillment who not only sets the industry's benchmarks but also keeps increasing the bar constantly. In 2019, when Shopify initiated the fulfillment program, Amazon was already operating with about 158 million square feet of fulfillment center space. Commissions, related fulfillment and shipping fees and, other third party seller services amounted to about USD 42 billion for the year ended Dec 31, 2018. 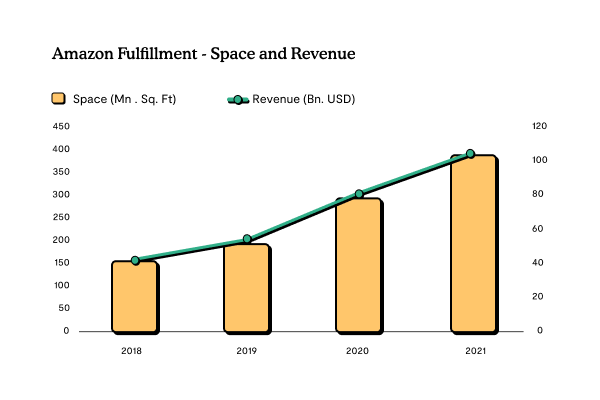 Besides offering Fulfilled By Amazon (FBA) to third-party sellers on Amazon, Amazon also offers MCF – Multi-Channel Fulfillment – a fulfillment service from Amazon for brands that sell outside of the Amazon Marketplace. These merchants need to have an Amazon Seller Central account but need not necessarily sell on Amazon. The fulfillment fee for MCF starts at $3.99/unit and their storage fee starts at $0.75 per cubic foot.

Through MCF, merchants can access Amazon's massive network of 185 fulfillment centers (110 in the US). Amazon is currently testing blank box fulfillment for merchants using MCF where the goods are packed in blank boxes instead of Amazon-labeled boxes when shipping to non-Amazon customers. The customer data is owned by the merchant. The merchant is also given an option to use a shipping carrier other than Amazon Logistics for a surcharge of 5%. 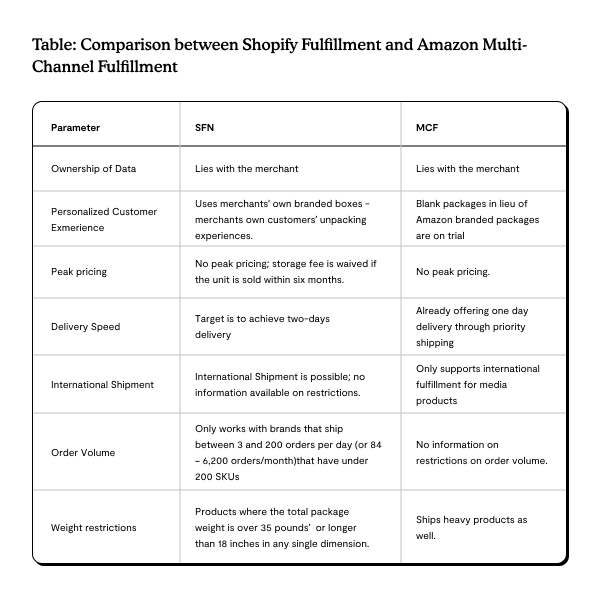 
While MCF is costlier than FBA, Amazon has also rolled out the Buy with Prime (BWP) initiative which enables Prime members to shop on non-Amazon websites using their saved checkout details while enjoying Prime benefits like free, fast delivery and free returns. Sellers availing themselves of the feature will pay service fees, payment processing fees, fulfillment and storage fees calculated per unit, according to Amazon. Participating merchants will use the Prime logo and display expected delivery dates on eligible products while the checkout will be through Amazon Pay. Initially, the program will be offered to Amazon marketplace sellers whose merchant sites use 'Fulfilled by Amazon'. Eventually, non-FBA retailers and brands will be included. 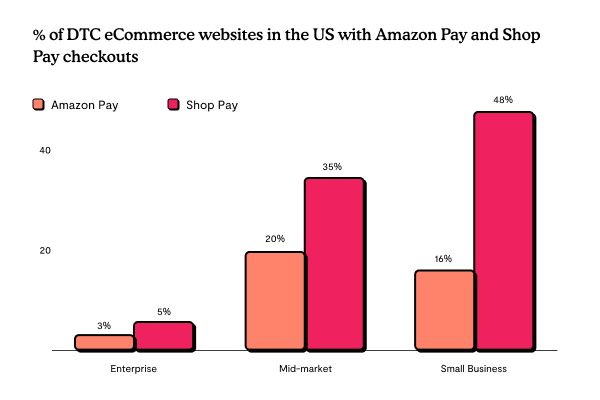 BWP does not exactly seem like a "Shopify-killer" initiative for now, with only around 17% of US DTC brands potentially ready for it (based on the number of merchants offering Amazon Pay as a checkout gateway, a prerequisite for BWP).3

However, non-FBA customers currently have a higher outlay for fulfillment via third-party logistics providers and have to contend with at least four varying price points including inventory intake fees, 'pick and pack' fees, storage fees, and shipping costs. The inventory intake fee and the 'pick and pack' fees by themselves can push the cost of fulfillment for the merchant anywhere from USD 8 to USD 20 per one-unit order. Unless Shopify is able to match the fulfillment costs via its SFN program for at least two day delivery speed, the small and mid-market DTC merchant base that forms its core will likely be looking at Amazon MCA or Buy With Prime.


In March 2022, the Logistics Managers' Index reached its peak value of 76.2, since September 2016. The first three months of 2022 were marked by high levels of inventory, and insufficient capacity to deal with it. This trend started at the end of 2021 when inventories increased by 2.4% in December 2021 – an all-time month-to-month record. This influx is at a time when consumer demand is waning for goods and increasing for services as well as price pressures due to burgeoning inflation. Inventory congestion has driven inventory costs, warehousing prices and overall aggregate logistics costs to all-time high levels. With fuel prices also rising due to the war in Ukraine , shipping and fulfillment costs are only going to increase in the near future. Amazon has already added a 5% fuel and inflation surcharge fee paid by sellers using Amazon's fulfillment services, which include storing, packing and shipping products. The rise in costs of logistics is only going to add to competitive pressures for Shopify which has yet to roll out a full-fledged SFN. With Amazon's own roll out of Buy With Prime still in its early days, it remains to be seen if Amazon is able to wean away Shopify merchants and how the SFN roll-out improves merchant stickiness for Amazon sellers within the Shopify system or offers better deals to the merchants compared to Amazon. Payment on Shopify - A Roundup 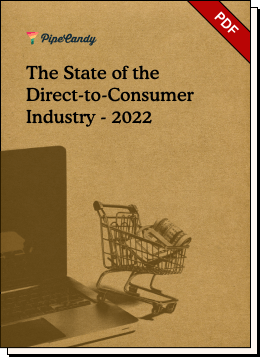